Dazaifu Tenmangū is a large shrine complex in the town of Dazaifu, Fukuoka, dedicated to Sugawara no Michizane. As you may recall from my post on the Yushima Tenmangū, Sugawara was a Heian-era scholar and poet who was, after his death, deified as Tenjin. 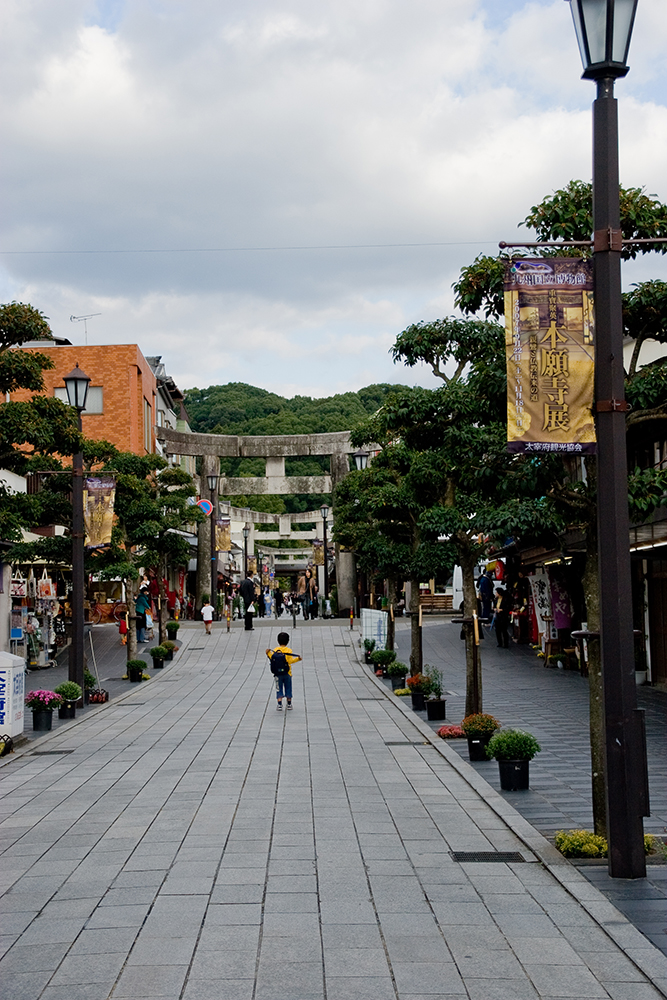 On Approach to the Shrine

Sugawara was born in Kyoto in 845, and was writing poetry by the age of five. As an adult he entered the Emperor’s service as a Minister, but a rivalry with fellow Minister Fujiwara no Tokihira led to Fujiwara making a public accusation that Sugawara was plotting against the emperor. Sugawara was exiled to Dazaifu, and died only two years later. 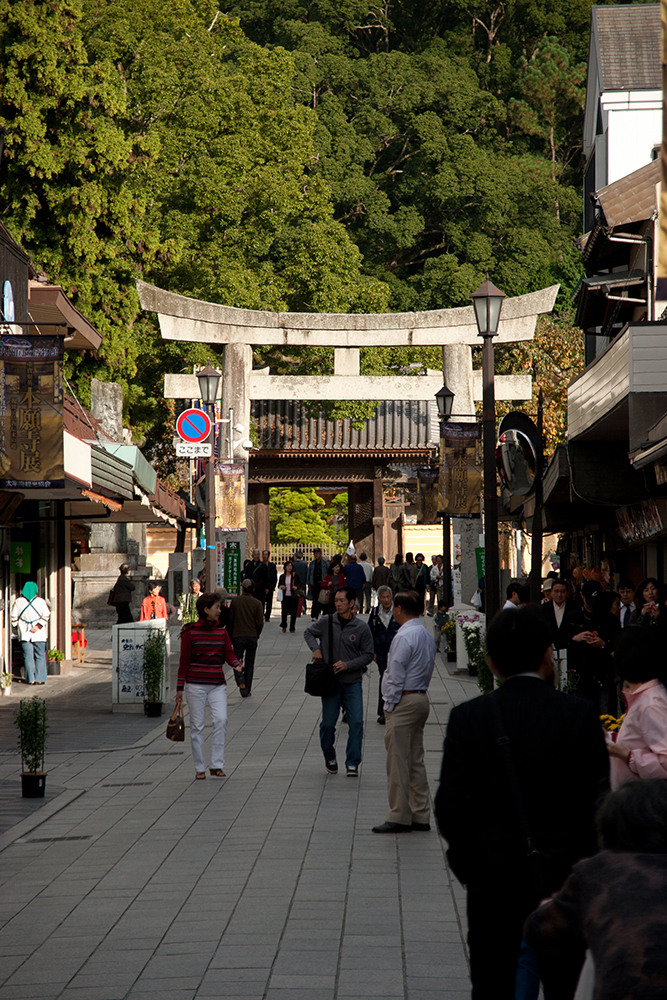 Dazaifu Tenmangū is built over Sugawara’s grave, making it one of the most important Tenjin shrines in the entire country.

A small garden within the shrine

As Sugawara loved plum trees, you’ll find that every Tenjin shrine has them, but Dazaifu has over six thousand, as well as kusunoki (camphor) trees which are around a thousand years old. 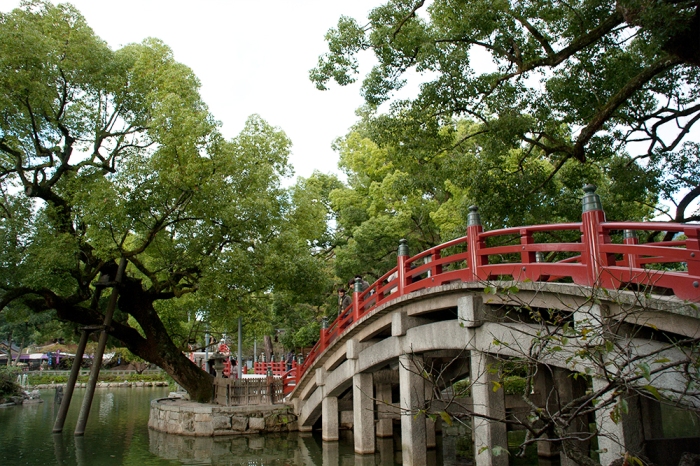 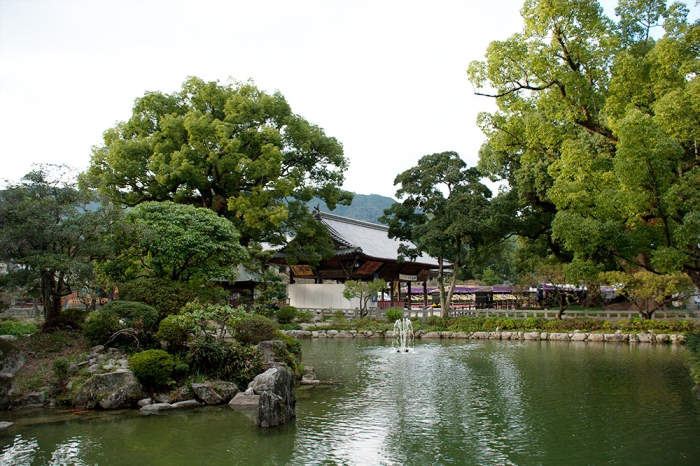 Within the shrine’s grounds is the famous Taikobashi. This bridge is constructed in three sections, which represent the past, present and future. The Taikobashi crosses the Shinkiike pond, which is built to resemble the kanji for “heart”. 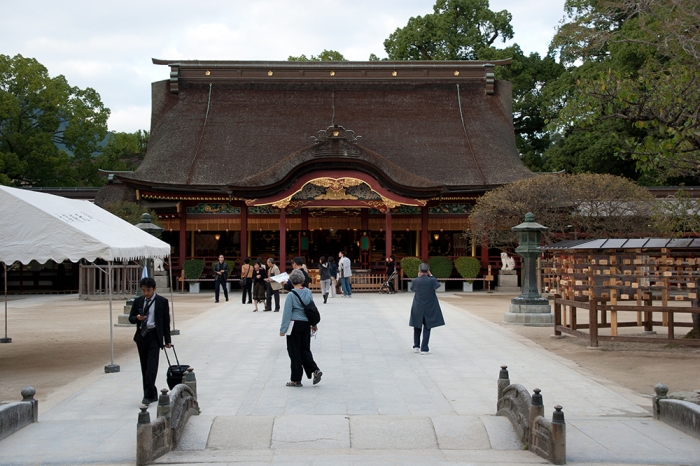 In front of the Honden, to the right, stands a plum tree known as tobiume, “Flying Plum Tree”. Legend has it that Sugawara missed this tree so much that he had it uprooted and brought to him in Dazaifu for replanting.

The shrine was built in 905 AD, two years after Sugawara’s death, by his follower Umasake Yasuyuki, but the structure you see today was built in 1591, as the previous shrine was – you guessed it – burned down.

The komainu here are very early examples, and seem to be made from porcelain rather than stone.

A regular feature of Tenjin shrines is the “stroking cow”, nade-ushi, which is the servant of Tenjin and is believed to cure maladies if touched. 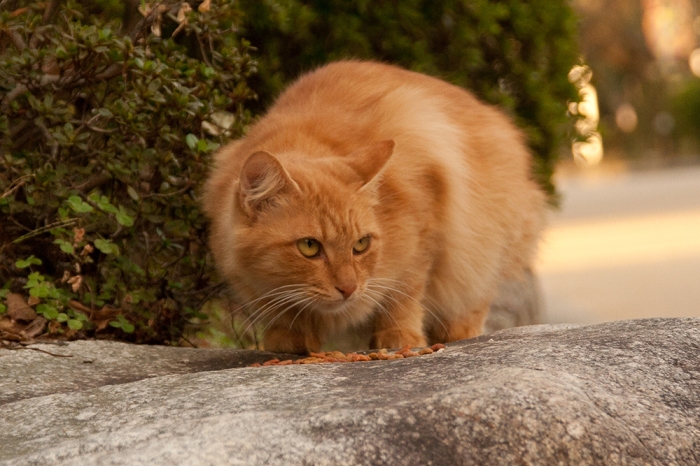 I saw several cats on site, and food had been left out on a stone for them, presumably by the monks. They didn’t seem particularly wary, but I suspect that if they’re being fed out on a rock they’re partially feral. Still, the cockles of my heart are always melted by kindness to animals.

The site is huge, and contains several other buildings, smaller shrines, statues, and even an old Sōrin. There’s an excellent treasure hall, where the shrine’s many treasures are on display. And if you need any more reason to visit, there is a fish food dispenser by the Taikobashi, so you can purchase a handful of food and toss it from the bridge into the mouths of waiting, hungry koi.