Sunshine, peace, and dazzling mountain views. Add to that one of Jogye Buddhism’s Head Temples and you have a wonderful side-trip from Busan.

The temple feels remote, despite being only a half hour’s hike from Beomeosa subway station (or a far shorter bus ride). Hop off at the bus stop and you have more uphill ahead of you, and on your way you can pick up a free audio guide from the tourist office (you will need to hand over your passport for the duration of the loan).

The staff in this tourist office are phenomenal: friendly, welcoming, and extremely knowledgeable not only on Beomeosa, but on everywhere in South Korea. When I returned my audio guide, I was offered a sit-down and a cup of tea, and we chatted for half an hour about my travel plans, places that I should see while in Busan, and sites worth my while when I reached Seoul. The chap I spoke with had travelled his entire country and knew it encyclopaedically.

The temple’s first gate is a great example of the single-legged (in profile) style you’ll see all across South Korea.

The temple’s guardians reside within another gate. Temporarily removed for renovation, they are now returned, and back to the task of protecting the grounds from evil.

More construction is still in progress, though. Here you can see the flagstones have been taken up for re-laying. This is surprisingly common practice in South Korea, although becoming less so of late.

This is very much a living temple. Tourists are in the minority. Most visitors are here to make use of the facilities, either as templestay volunteers, staff, or in prayer. 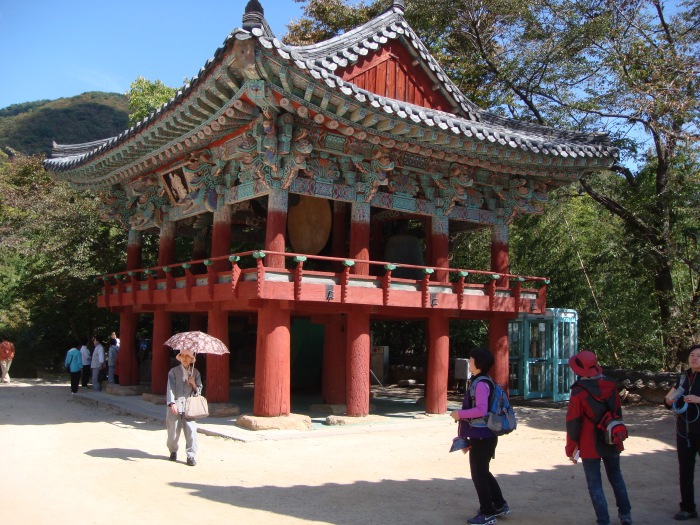 The temple’s instruments are housed in a huge structure to the front of the temple grounds so that, when they are played, they have unobstructed acoustics and can reverberate out into the valleys surrounding the temple. 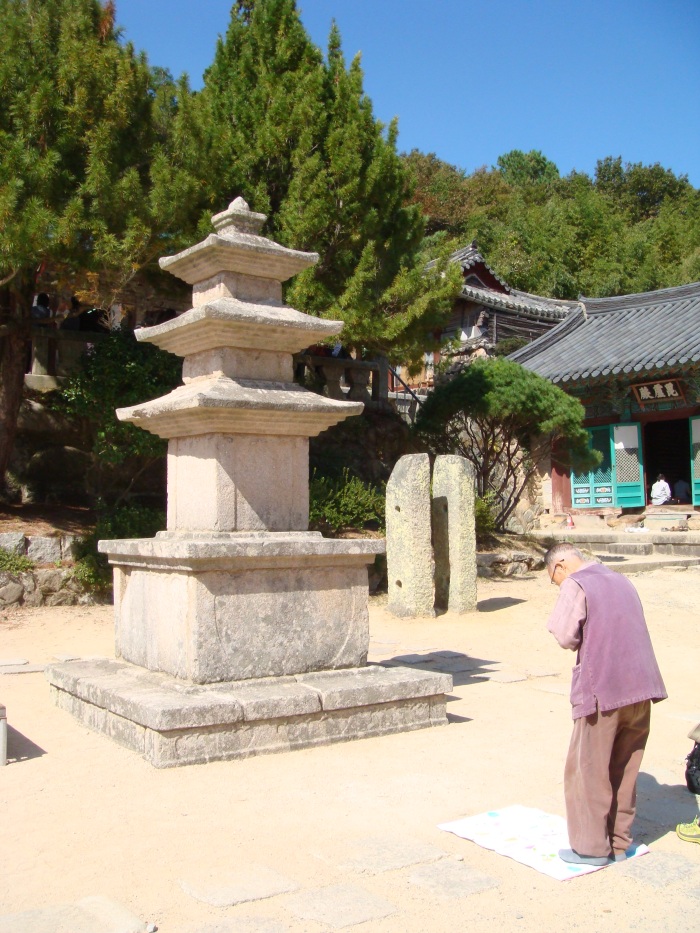 The courtyard’s pagoda is in near-constant use.

There are several temple buildings around the complex, each dedicated to a specific purpose. 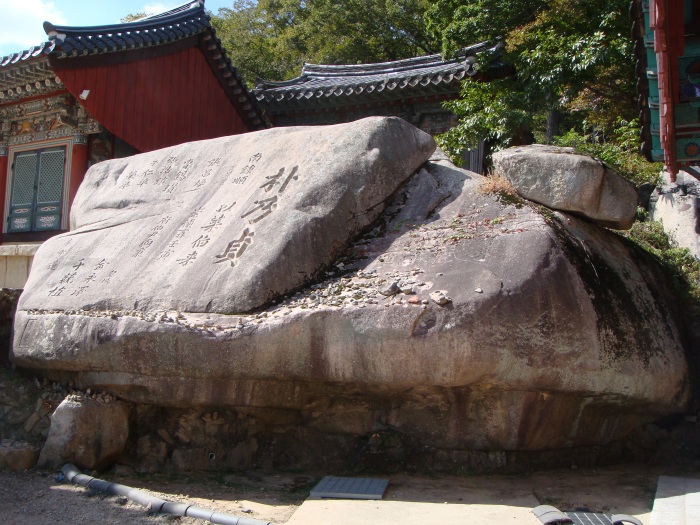 Nestled between them is the huge Cheongryong Am (Turtle-Shaped Rock), on which a poem was carved by Dongak Leeanul, a popular Joseon-era poet. Dongak was visiting the temple with a friend, and decided to pop out a poem on this ancient stone while there. The audio guide’s description of this act falls only slightly short of likening it to an act of vandalism, which I’m not sure was its intended effect.

Thanks to the propensity for building temples up in the mountains, the views are wonderful.

There is also a museum on-site, but photography is not allowed within. It contains some excellent Buddhist art including wall-hangings and statues, and there are temple records and musical instruments too. It closes for lunch, and pipes in surreal Buddhist cover versions of Beatles hits.

There is also an excellent hiking trail around the mountain, if you’d like to explore further.

Take Subway Line 1 to Beomeosa station and leave via Exit 5 or 7. Walk along the road, and after about five minutes you will reach the Samsin bus stop. Take Bus number 90 to Beomeosa Temple.