Yushima Tenmangū, also known as Yushima Tenjin, is a small shrine in the Bunkyō Ward of Tōkyō which is dedicated to Sugawara no Michizane, a Heian Period scholar and poet. Deified after his death as the kami Tenman-Tenjin (often shortened to Tenjin), there are many shrines across the country dedicated to him, and the Yushima Tenmangū is Tōkyō’s most important.

Gate down to street level

It was originally built in 458, for another kami entirely: Ameno-tajikaraono-mikoto, the kami of “strong hands”, often worshipped as a deity of sports and physical strength. After Sugawara’s ignominious political exile and subsequent death, however, the city was beset by natural disasters, so Sugawara was deified in an attempt to appease his angry spirit.

As the years passed, Tenjin underwent the transformation from a deity one appeased to attempt to waylay disaster, to one appealed to for success in scholarly pursuits. He had, in his time, been the most renowned scholar and poet, and this shift began to embody what Sugawara had stood for while alive.

Cows are a popular motif at Tenjin shrines, as they are believed to be his servants. In particular, statues of a nade-ushi, “stroking cow”, are meant to cure ills if you touch them.

Omikuji (paper fortunes) are available from this cute little puppet machine for 200円, or you can obtain them from the omikuji counter as with most other shrines.

During exam season, the shrine is practically overflowing with ema, hoping for good fortune in the coming exams. Tōkyō is just down the road, so you can imagine how many ema are sold this time of year! Tenjin doesn’t take pity on slackers, either; an ema is no substitute for hard study. 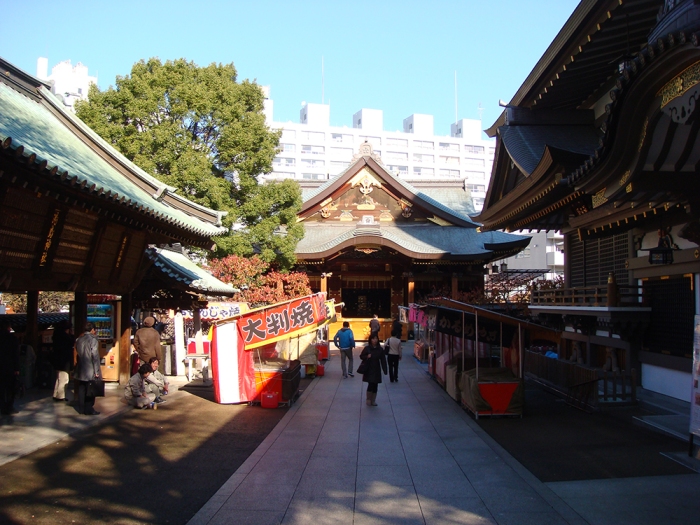 The Haiden (hall of offerings) is quite small, as befits this inner-city shrine. As you can see from this picture we visited in the evening, and the majority of stallholders had already departed.

On site at the shrine is a small Treasury, displaying the omikoshi (portable shrines) from Yushima Tenmangū’s annual ume matsuri (plum festival), as well as various Tenjin-related treasures and works of art, including a Hiroshige ukiyo-e entitled 117 Hilltop View, Yushima Tenjin Shrine, part of his 100 Famous Views of Edo series. Much like his other series, evidently Hiroshige couldn’t contain himself to a hundred.

Inari shrine, hidden behind this Komainu-a

There is also a small shrine to the ubiquitous Inari, tucked discreetly off to one side. I cleverly took a shot which obscures the shrine entirely behind chōchin and komainu-a.

There’s a small bridge over the similarly small parking lot behind the main buildings, but during new year’s and the plum blossom season this area is lined with stalls and celebrants! 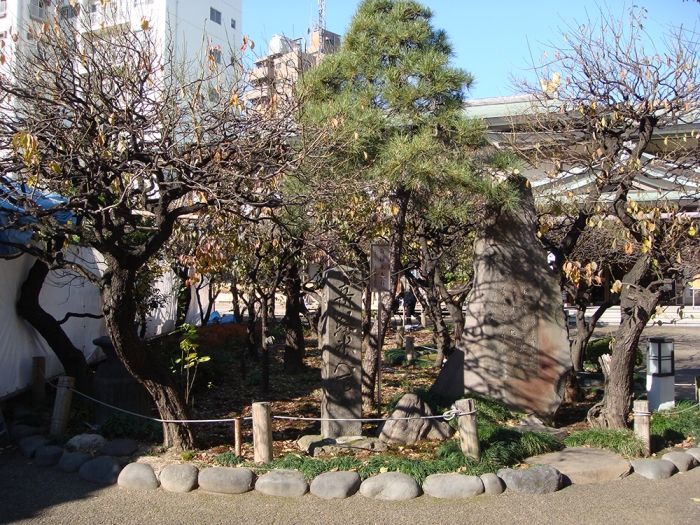 There are over three hundred plum trees at the shrine. Sugawara had apparently been a fan of them, and his first poem – written when he was only five years old – was about the beauty of plum blossoms. At one time it seemed that the shrine’s trees were in danger of dying out, so the local community got together to buy plum saplings and replenish the gardens.

This is an excellent inner-city shrine which, while small, is no less important than those you’re more likely to find in the guidebooks. And it’s surprisingly close to Ueno Park, if you happen to find yourself in the area. I’d like to thank Doug at jkllr.net, without whose excellent post I’d not have found this shrine!

Take the Chiyoda Metro Line to Yushima Station. Take Exit 3 and turn left, then left shortly again at the traffic lights. The steps up to the shrine are on your left after a two-minute walk.

One thought on “Yushima Tenmangū, Tōkyō”