There aren’t a great many ways to get inside the Demilitarised Zone, and only one to visit the Joint Security Area itself. USO Tours offer a day-long coach trip from Seoul, just down the street from the War Memorial of Korea.

Booking the USO Tour proved a fiddly process: they require payment at least four days in advance, but are not open on Sundays – the only day we had in Seoul before taking a bus down to Andong. This caused us a bit of run-around to visit their offices during opening hours, and we had to reschedule our DMZ tour to later in our Seoul week to accommodate the pre-payment stipulation. They do accept credit card details via email, but being a good internet-savvy Brit means that I was not about to email my card details to anyone at all.

In the end it was all sorted. The USO staff are very helpful, and were able to help me reschedule via email while I was too far from Seoul to visit.

If you read the USO’s website, they are abundantly clear that the tour has a dress code. When you pay, they remind you that the tour has a dress code. They are not joking. I thought perhaps that they were going a little over the top on the frequent reminders about the dress code, but apparently not, as one person arrived on the morning of the tour dressed completely unacceptably for the plentifully-mentioned dress code. On being told that unless they could resolve this before the bus left they would not be going on the tour, another kind tourist loaned them a coat, which they had to wear fully-fastened on a very hot and humid day.

There is a dress code.

Our particular tour day was heavily subscribed and filled two coaches. Each coach had its own tour leader, and the entire day was extremely well-organised. The coach drives up to and enters the DMZ and guests are handed over to the US Army at Camp Bonifas. The USO/Koridoor staff and vehicles are not allowed to enter Camp Bonifas, so you will be with your American soldier on one of the camp’s own buses from the entrance onward.

As you may expect, photography within the DMZ is very limited. You are travelling through active military bases, visiting the Joint Security Area, and military observation posts in a country still deadlocked in a Cold War. The dress code, photography restrictions, and behaviour rules are there to protect you from becoming an object of North Korean propaganda. If you don’t want photographs of you circulating out of Pyongyang, it’s in your interests to do as your guides suggest. If you think it’s childish, bear in mind that North and South Korea enter into pissing contests over who has the tallest flag, who can hold off going to the toilet for the longest, and whose village near the border looks the most awesome. A photograph of a fat Westerner pointing slack-jawed toward the North could be used any number of ways. 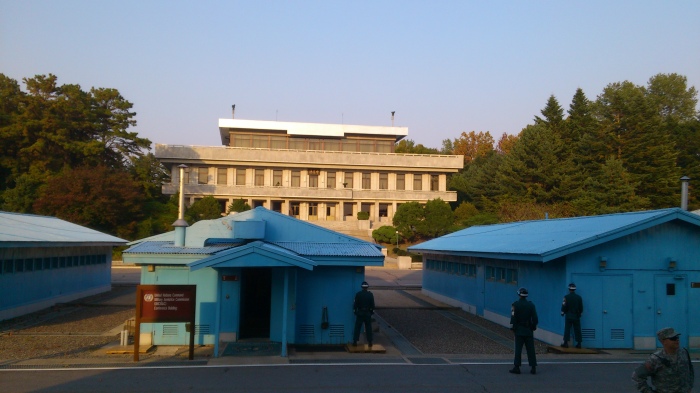 The border-straddling huts at Panmunjom, with North Korea’s own administrative building in the background.

Our American squaddie had an excellent, dry sense of humour, and he was bright as a button. He took us to an auditorium for a 20-minute presentation on the history of the DMZ which led from World War II to the present. We went over to the JSA and walked around North Korea – albeit inside one of the blue oblong meeting huts. We met RoK soldiers who have to be experts in their chosen martial art to stand guard at Panmunjom. We were regarded with some boredom by North Korean soldiers from across the border line. We were also shown sites such as the Bridge of No Return, and the location of the infamous Axe Murder Incident.

No photography beyond the yellow line.

North Korea. It’s out there, somewhere.

The Bridge of No Return. Much smaller than Salt would have you believe.

The USO staff took us to see the Third Tunnel of Aggression, which is hot and cramped and you’re given a safety helmet for a reason. This is one of many tunnels allegedly carved out by North Korea using sticks of dynamite. You are only allowed so far before you reach a barrier impenetrable to tourists – just in case you were thinking of defecting. The tunnel is amazing, but if you’re none too comfortable in cramped spaces I’d suggest waiting at ground level and exploring the interesting museum up there instead, which details how the DMZ has become one of Korea’s best nature reserves.

We also visited Dorasan train station, which is wonderfully eerie. This testament to how much money South Korea is willing to plough into its own propaganda is the most modern, clean, and efficient disused train station in the world. There is a lot of fluff on boards around the station to notify you of how this station is going to reunite North and South Korea, and connect all of Korea to the Trans-Siberian Railway. It all adds to that spooky Cold War feeling. 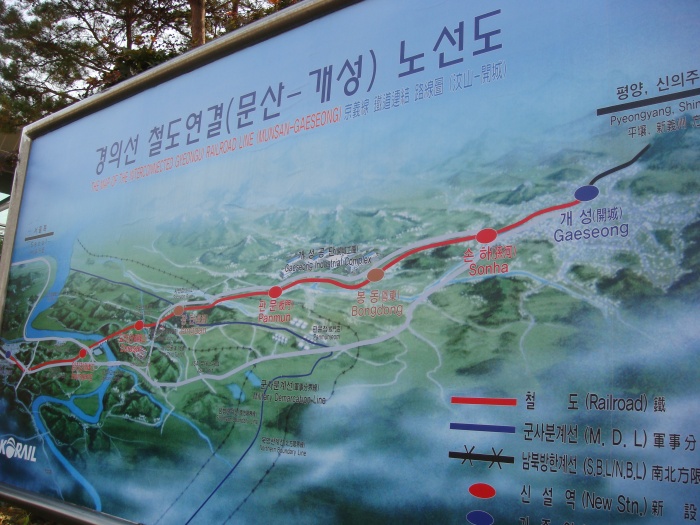 There is genuinely a commuter train: a small number of South Koreans are employed at a North/South venture within the DMZ, on the Northern side of the border. Items such as semiconductors are made there, by Samsung. 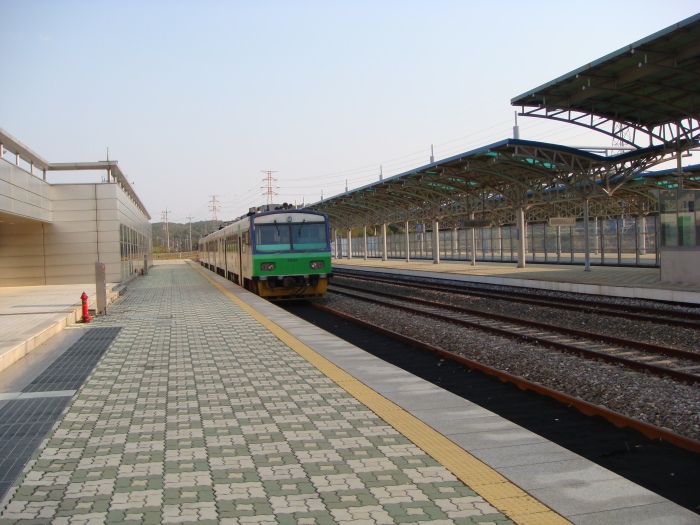 I do wonder whether this train trundles back and forth to stop the rails rusting.

This way for Pyongyang.

On the way back the coach stops off for dinner at a cafeteria-style restaurant. The cost of this meal isn’t included in the tour, and you absolutely have the option to bring your own food instead. I strongly recommend this; the cafeteria’s Bibimbap was revolting and overpriced, and left me feeling queasy.

Overall the tour was somewhat rushed in places where it didn’t need to be; it would have been nice to have had more time to spend at the DMZ Museum, for instance. But it was a very good tour, and I wouldn’t hesitate to recommend it. It’s the only way you will get to set foot in Panmunjom, and both military and non-military personnel were excellent at every step of the way.

There are a few things you must remember to do:

There are plenty of opportunities to buy snacks and cold bottled drinks throughout the tour.

Be sure to check Koridoor’s website before you travel. The DMZ/JSA tour runs from early morning until mid-afternoon on some days, and mid-morning to early evening on others. Check their schedule or email the team at Koridoor to nail down which particular tour times are running on the date you are interested in.

The tour leaves from the USO/Koridoor office at Camp Kim, and returns there. Take Subway Line 6 to Samgaki Station and use Exit 10. Continue north along the pavement until you reach the razorwire-topped wall of Camp Kim, and follow the wall, keeping the wall to your left. You will, after about 10 minutes, come to the Camp’s Vehicle Entrance, which also has the USO’s main entrance just before the guard post and barriers.

Cost: The tour is $80USD for civilians, or $40USD for military personnel and families.