Only 19 miles south of Seoul lies South Korea’s only remaining walled fortress, Hwaseong. It surrounds Suwon city centre, and was completed in 1796 to house and honour the remains of Prince Sado. More on him in a moment. 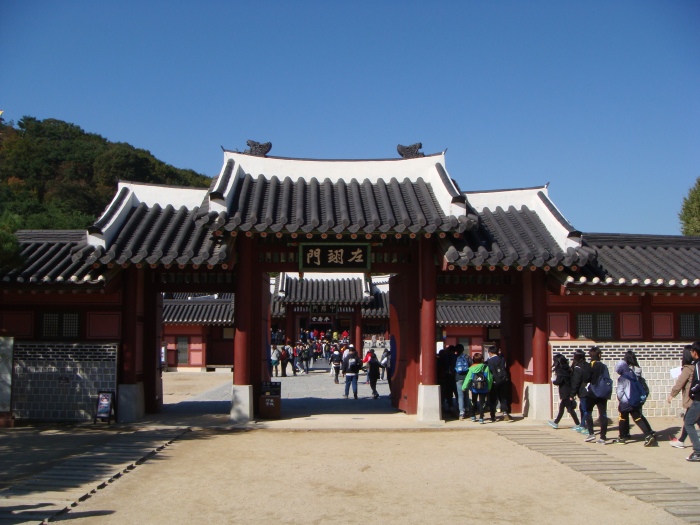 Within the fortress walls is Haenggung, the palace built by King Jeongjo in 1789. The evidence suggests that he built Haenggung in preparation of relocating the capital from Seoul to Suwon. King Jeongjo was Prince Sado’s son, and he was not especially enamoured of the way in which his father had been executed. 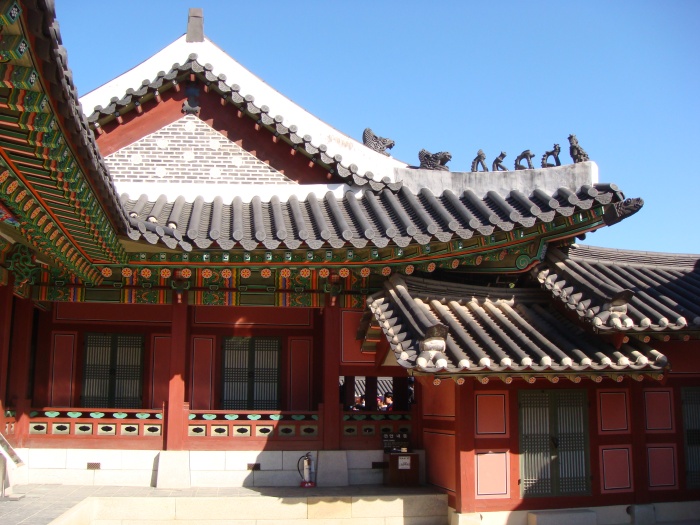 In spite of a relatively peaceful hundred years or so for the Joseon Dynasty (who were often riddled with power struggles, assassinations, and political misdeeds), poor Prince Sado was simply never going to reach the throne. He was purportedly mentally ill, and it was claimed that he randomly murdered people and was sexually deviant, but historians cannot settle on whether this was character assassination with political motive, or genuinely true.

Either way, Sado’s father, King Yeongjo was sufficiently motivated to do away with the erratic prince. Court rules prevented him from killing Sado himself, and Sado refused to commit suicide when ordered to, so ultimately Sado was commanded to enter a wooden rice chest in the middle of August. It took Sado eight days to die.

If you’d like, there is even a comparable rice chest for your self-imprisoning pleasure. It’s terrifying. Small children clamber in and out of it and barely fit. Sado was 27 years old. 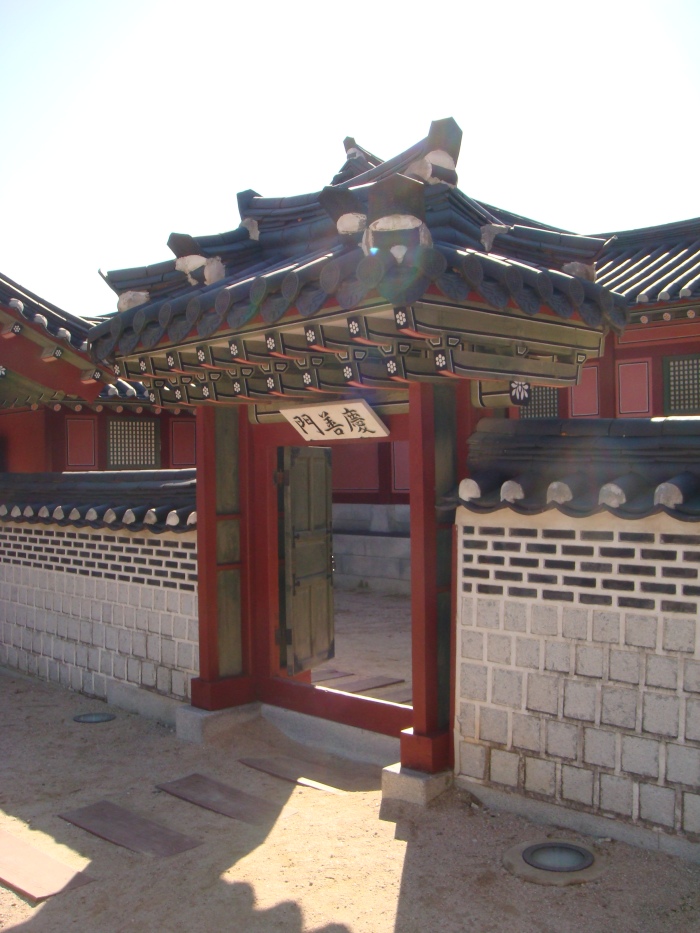 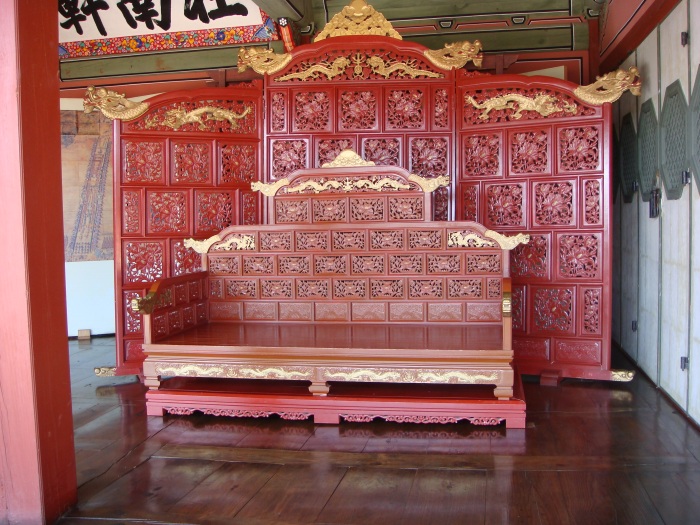 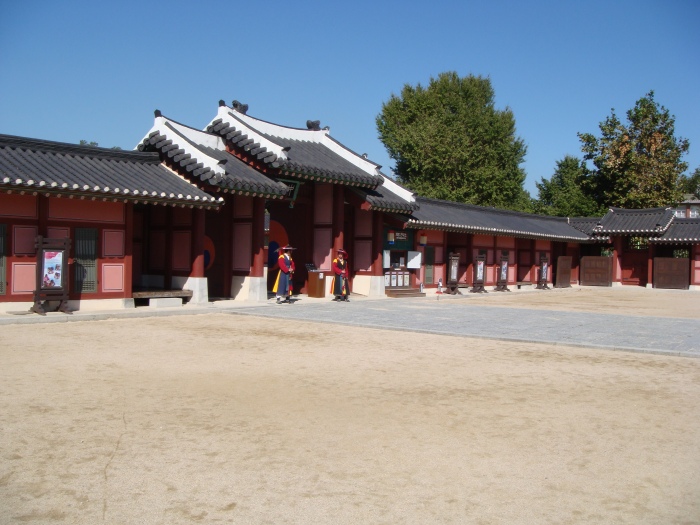 The palace is otherwise genuinely lovely. In the courtyard outside the palace is Suwon’s tourist and ticket office, staffed by extremely friendly and helpful people who are justifiably proud of their town and its heritage. It is also where the daily (except Monday) Martial Arts demonstrations take place.

Don’t miss this demonstration! Arrive early and find a spot, because both children and grannies will arrive and try to get in front of you once the rope is put up, and both can be very sneaky in their attempts. 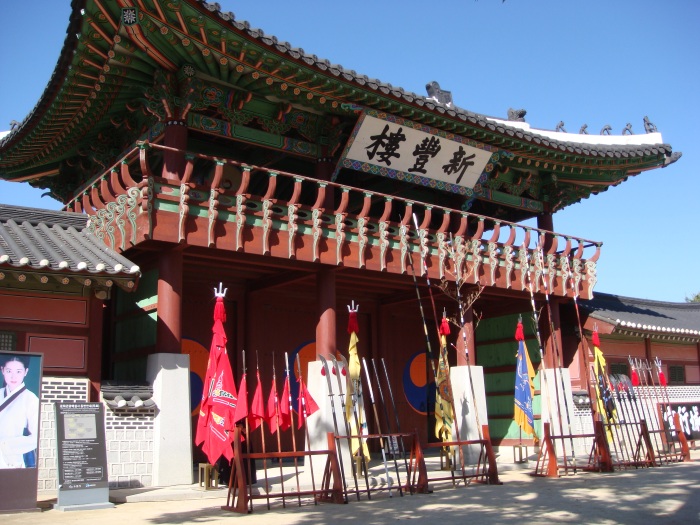 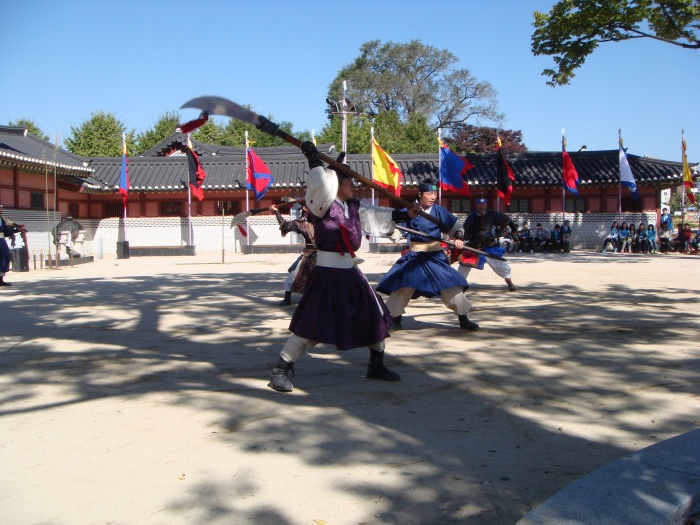 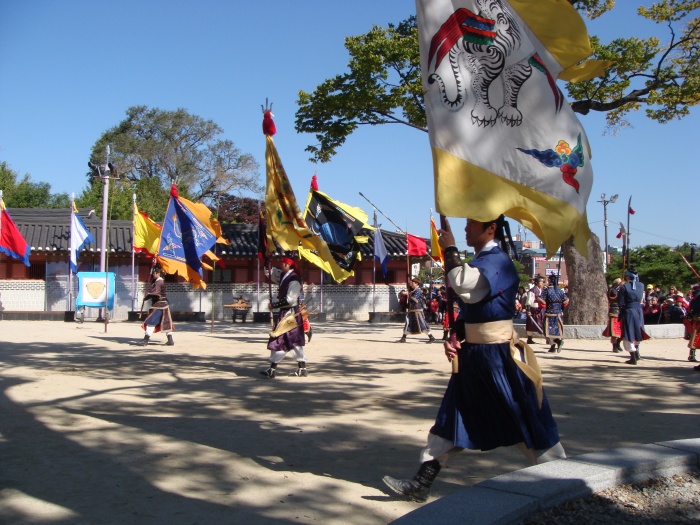 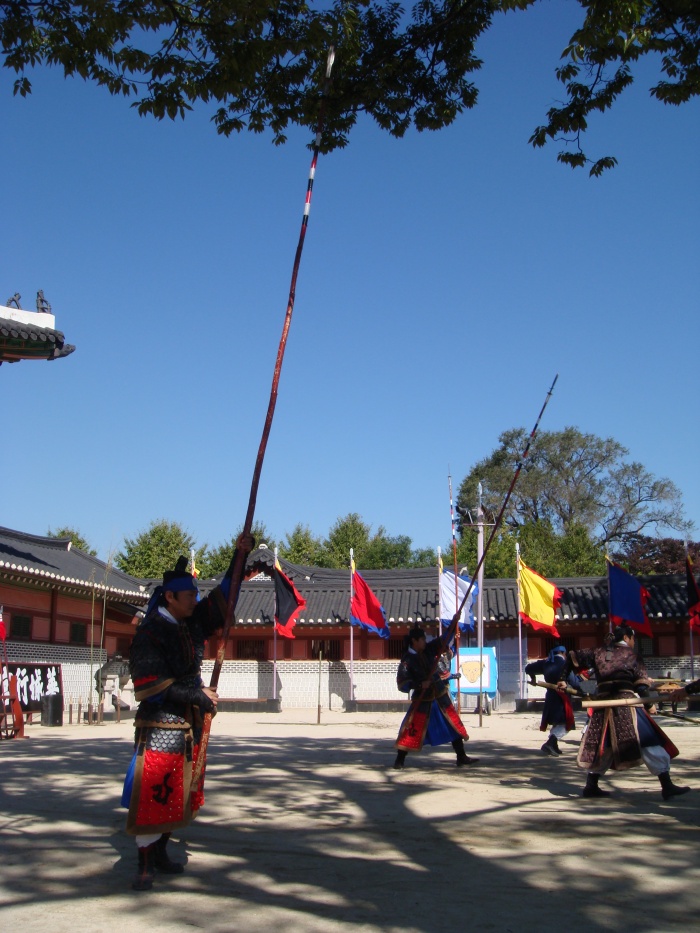 A broad spectrum of Martial Arts are demonstrated, from native Korean to Chinese and Japanese, and audio commentary is given in four languages throughout the display: Korean, Mandarin, Japanese and English. For the majority of the demonstration blunted weapons are in use, but the very comprehensive display ends with cutting techniques from a variety of live weapons. The demonstration lasts for half an hour, and is worth every minute. Be aware that in December the demonstrations only run at weekends.

Suwon’s main feature is the fortress itself, and you can hike the entire 5.74km of wall which surrounds it. There are guard posts, defensive turrets, “secret” doors, and the Fortress’ four main gates to explore. 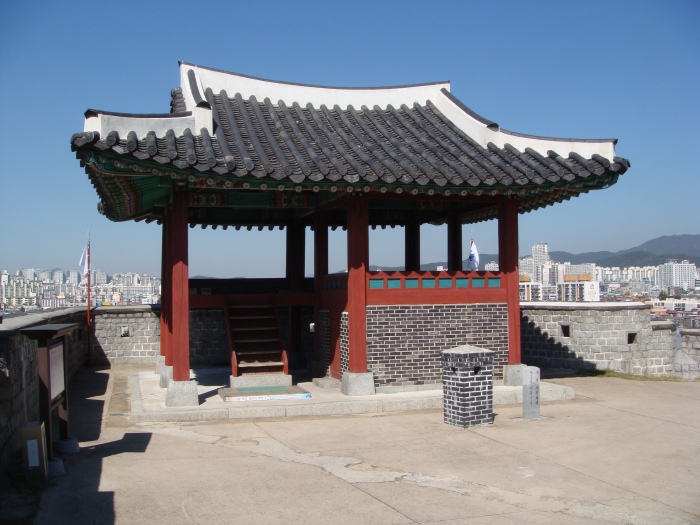 Guard outposts have stairs up to the main level, because the stone-encased ground level is home to the ondol underfloor heating: a fire was maintained to give underfloor central heating in even the simplest of homes. Tourists are welcome to head up the stairs so long as they remove their shoes first. 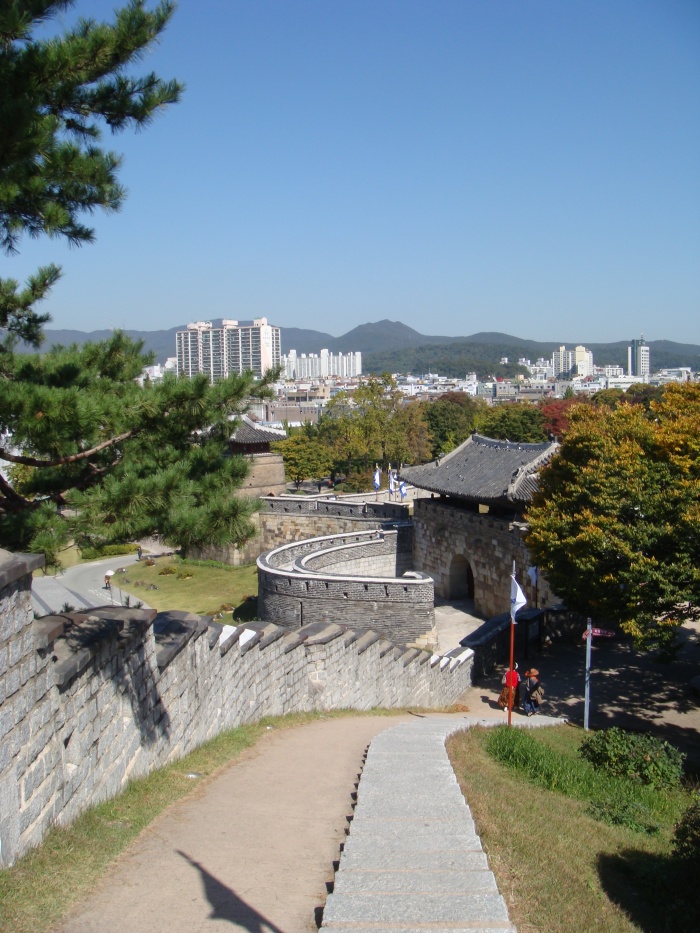 This approach to Changnyongmun, known locally as Dongmun, shows this particular gate’s excellent design. Potential invaders are unable to approach the gate en masse, and are funnelled into a brutally efficient kill-zone from which guards can surround the outsiders and rain down hot oil and arrows should the visitors prove unfriendly. 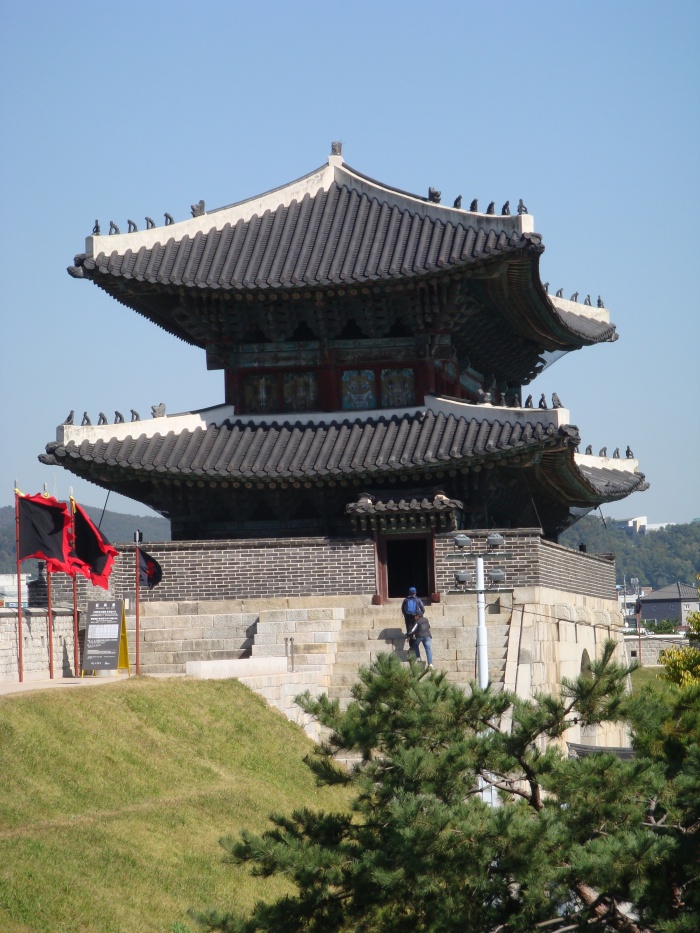 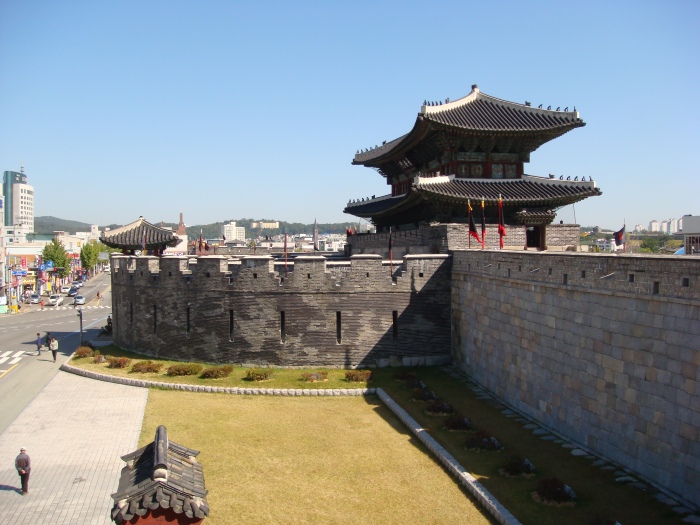 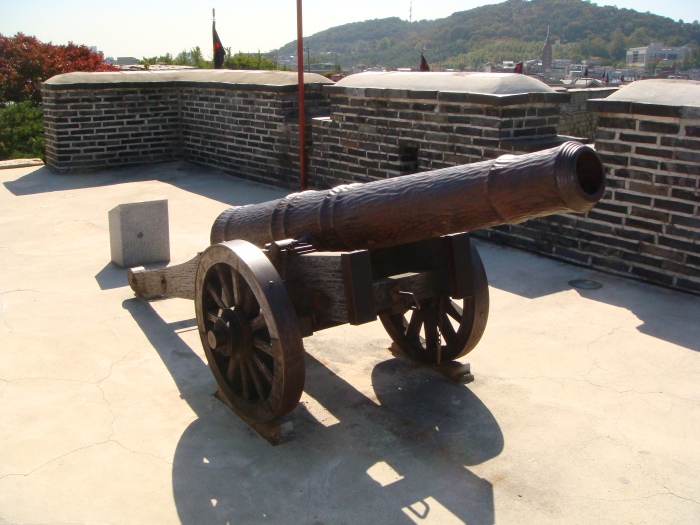 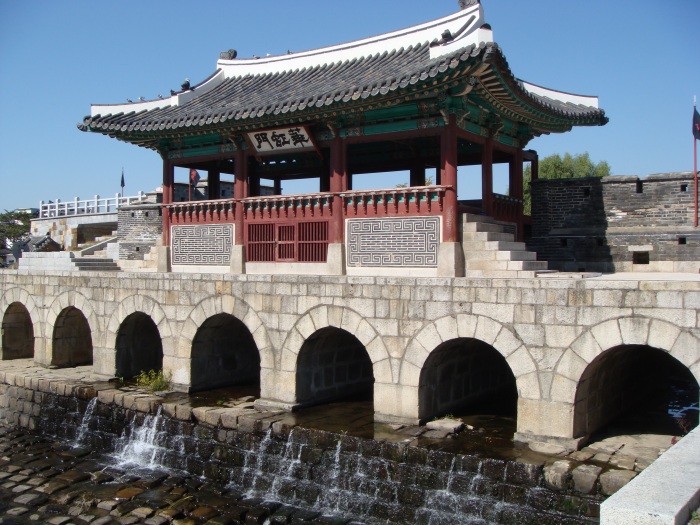 Suwon also contains a Korean Archery range for tourists to have a pop at using traditional Korean archery techniques. This is more of a fun feature than serious archery training – the bows are a little rickety, and the instructor encourages you to hold them poorly to prevent the string chafing along your forearm. But for only ₩2,000 for ten arrows it’s great.

Take Subway Line 1 to Suwon Station, then Bus 11, 13, 36 or 39 to Paldalmun. Tourist maps are available from the information centre outside Suwon Station.

For more information, and opening hours, see the Seoul Guide and the KTO website. 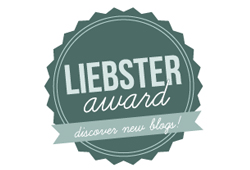