Also known as the Asakusa Kannon Temple, Sensōji is the oldest temple in Tokyo, after a statue of the Bodhisattva Kannon was fished from the Sumida by two brothers on the 18th of March, 628. Hinokuma Takenari and Hamanari recovered the statue from the waters while fishing from their boat, and the head of the village Hajino Nakatomo recognised it as a statue of Kannon. He became a priest, enshrined it within his house and turned his house into a temple so that everyone in the village could worship there. 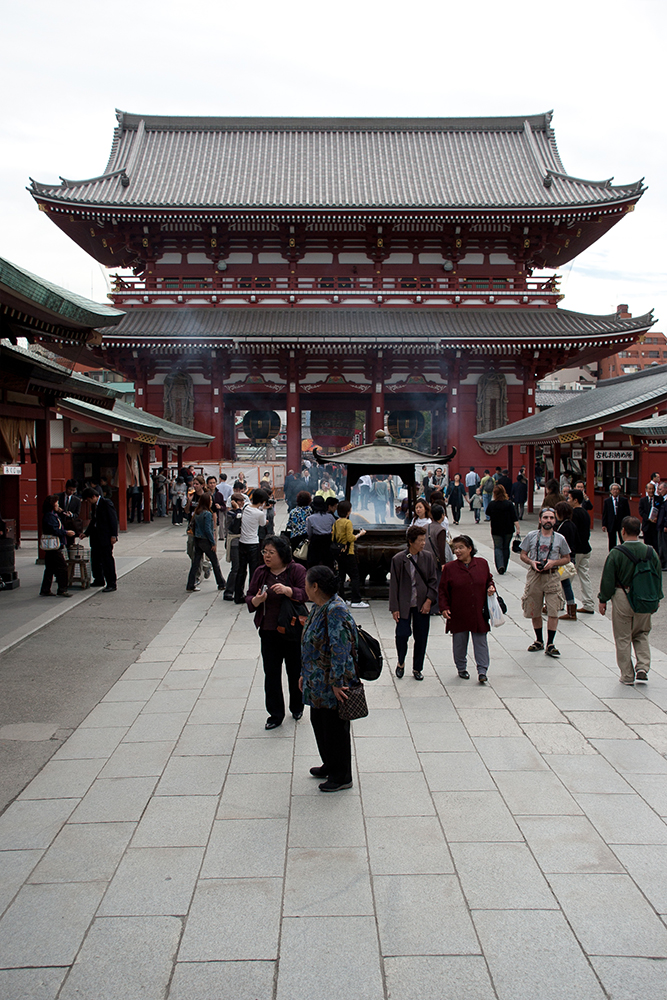 By 645, a Buddhist priest named Shokai Shonin had heard of this miraculous series of events, and built Kannondo Hall in Asakusa. He had a vision in a dream that the statue should be hidden from view, and it has been so – more or less – ever since then. Ennin, the most highly-ranked priest of Enryakuji, made a copy of the statue sometime in the mid 9th Century so that the people could worship without contravening Shokai’s vision. 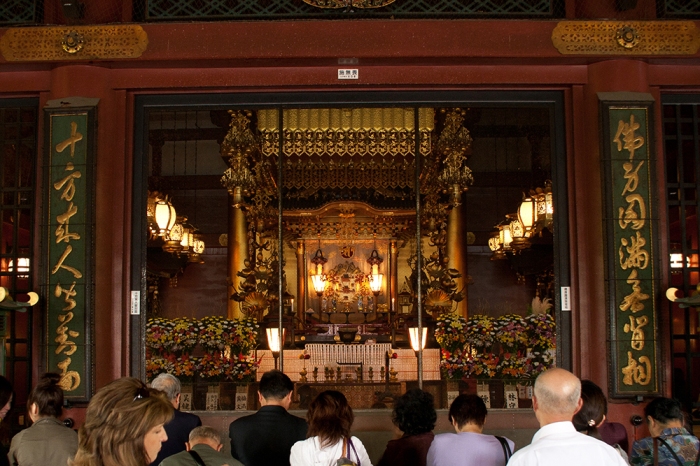 Through both the Kamakura and Edo periods, Sensōji was venerated and protected by the Shogunate, and flourished, becoming one of Tokyo’s most important temples. 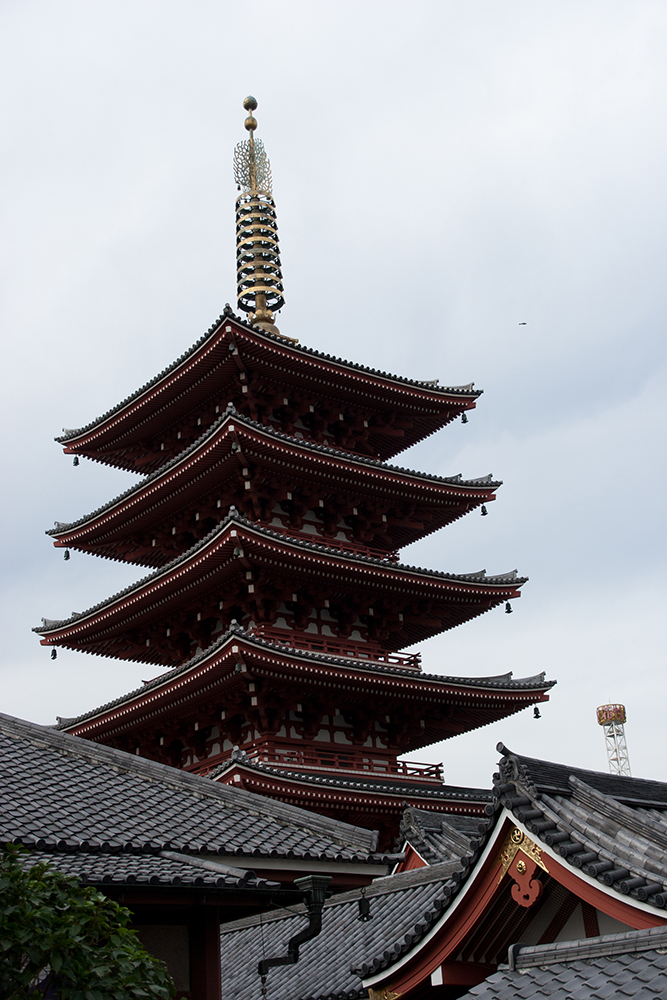 The Tokugawa Shogunate even added a small Shinto shrine, the Asakusa Shrine, on the same site. Tokugawa Iiemitsu to enshrine the three founders of the temple – Hajino and the Hinokuma brothers. 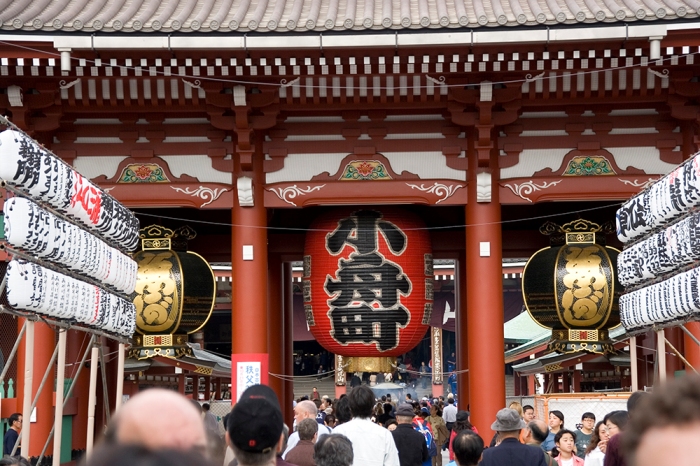 Sensōji’s most iconic installations are the vast paper lanterns at either end of Nakamise-dōri, the traditional shopping arcade which occupies the path leading up to the temple. At the outer edge of the temple complex is the first gate, Kaminarimon, featuring the first of the two lanterns. Past Kaminarimon is Nakamise-dōri, a fantastic arcade which sprung up over two hundred years ago to sell goods to pilgrims. Over the years it has been demolished, rebuilt, demolished, rebuilt, and now sells a variety of goods to pilgrims and tourists alike: everything from kimono, ukiyo-e prints, fans, and replica swords to Studio Ghibli merchandise, maneki-neko, t-shirts and snacks is sold along the market’s stalls, and if you go behind the stalls to the shops which line the street itself, you will find an excellent assortment of restaurants and shops. 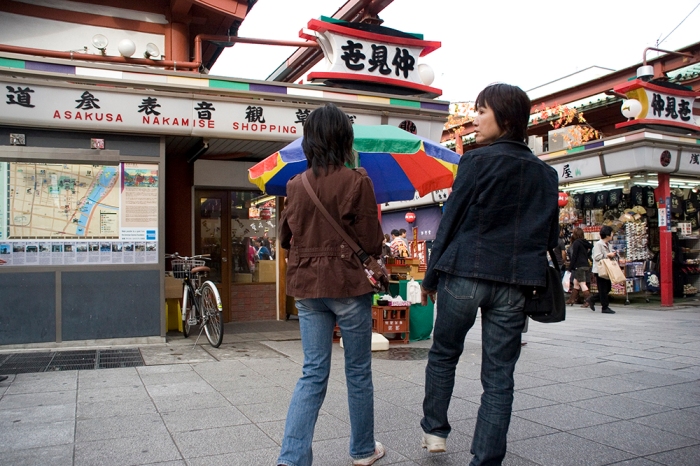 Oh, and they also sell oppai, the infamous Niigata Bust Pudding. It is exactly what it says on the box: pudding, shaped like boobs. The packaging is well-designed. Although my photo doesn’t show it, the box is initially closed, and folds out into the display below on opening. Some boxes have a bra layer, which you then peel back to reveal the breasts.

The pudding is custard, and comes with a small sachet of syrup. A pair of custard and syrup boobs make the ideal gift for anyone back home with an interest in such things as custard, syrup, boobs, or a sense of humour. While these are often said to be Akihabara souvenirs, you can find them just about anywhere in Japan, and different regions have different varieties and packages. I’ve seen them on market stalls and in convenience stores, but not often in Akihabara itself.

No temple would be complete without its Chōzuya, and Sensōji’s is a fantastic example. With much of the temple destroyed by bombing in World War II, the majority of structures are modern, and while this fountain is no exception, the level of craftmanship is astounding.

As with other temples you can purchase an ema or omikuji, as well as catch a glimpse of traditional ceremonies taking place. Asakusa’s most famous festival, the Sanja Matsuri, begins during the third weekend in May and is ongoing for four days as processions of people and mikoshi (portable shrines) travel the streets, closing the whole district to traffic until the evenings. These mikoshi are brought to the shrine to be blessed and then returned to their home districts to bring good luck and fortune with them.

Take the Asakusa Subway Line to Asakusa Station. The temple and Nakamise-dōri are signposted from within the station.