The story of the 47 Ronin is to Japan what Arthurian or Robin Hood legends are to England, with one vital difference: we have concrete evidence of the 47 Ronin. Over 300 years after their deaths, their graves are still attended, incense lit for them by strangers every day of the year.

The Graves of the 47 Ronin

If you don’t know it, the tale runs thusly: In January 1701, while in attendance at Edo Castle, Lord Kira Yoshinaka had been provoking the young daimyo Lord Asano Naganori. Asano was a minor noble with a small fiefdom and hadn’t produced an heir – he’d had to adopt his brother as his son after an illness in 1694 left him realising that his lands would be seized by the Shogunate if anything happened to him. Kira, meanwhile, was a high-ranking kōke (civilian official). While kōke enjoyed certain privileges, they were of lower status than daimyo – and, in fact, ineligible for that rank, as their lands were worth less than those of a daimyo.

The details of the disagreement between Kira and Asano are unknown, although it widely believed that Kira deliberately failed in his duties to instruct Asano on proper courtly etiquette so as to make Asano lose face. After sustaining Kira’s insults for as long as he was able, the young Asano eventually buckled and drew his sword on Kira, attacking him. He failed to kill Kira, only injuring him, but as the attack had taken place in the shogun’s grounds, Asano was sentenced to commit seppuku immediately for the transgression.

It was customary at that time for both parties to receive the death sentence, the idea being that everyone would be on their best behaviour if everyone was punished for these failures. Kira, however, escaped judgement and went free.

Asano committed seppuku that very afternoon and despite him technically having an heir, the Shogunate seized his fief, leaving over 300 samurai masterless.

Although the legend revolves around 47 Ronin, it’s believed that over

fifty initially banded together to plot revenge against Kira. They swore their oaths in secret, as retribution was strictly forbidden, and it took them over a year to formulate their plan. Their leader, Ōishi Yoshio, “fled” to Kyōto to give Kira’s spies the impression he’d given up and was spending the rest of his days whoring, drinking, and letting himself go to ruin. It took a year and a half of boorish behaviour for Kira to finally believe that retribution would not come. 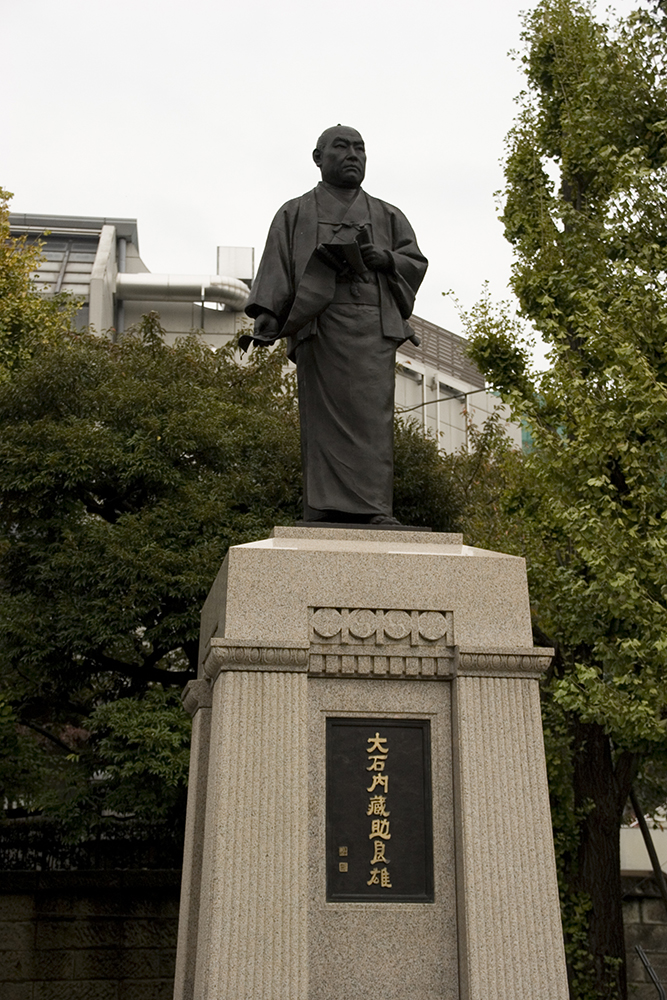 In December 1702, the plan came to fruition. The ronin reconvened and assaulted Kira’s mansion, marching for miles to reach the house from Asano’s grave at Sengakuji, enacting a meticulously-planned assault, then marching all the way back again with Kira’s head to place it at their Lord’s grave.

For disobeying the prohibition against taking revenge, the ronin were sentenced to death. But because they had followed the bushido code and avenged their Lord, they were allowed to die honourably by committing seppuku, rather than the dishonourable execution afforded to criminals.

46 of the ronin died on the 4th of February 1703. The 47th had been sent on a mission and so did not arrive at Asano’s grave with the others: he was pardoned when he did finally return – possibly due to his age, possibly as a concession to public sentiment – and lived to the age of 78. When he died, he too was buried with his comrades at Sengakuji.

Also buried at Sengakuji are Asano’s family, and a Satsuma man who once found Ōishi drunk in the street in Kyōto and abused him for being a lousy example of a samurai. The latter finally discovered the true intention of Ōishi’s ruse after Ōishi’s death, and committed seppuku at Sengakuji after begging forgiveness at Ōishi’s grave.

It’s strange, then, that Sengakuji is off the map as far as most foreign tourists are concerned. The temple isn’t large, the site isn’t ostentatious, and guide books barely remark on the location. Visiting Sengakuji offers a powerful, important insight into Japanese culture, yet the majority of tours and guides won’t even mention it.

Present at Sengakuji is also the wonderful museum which recounts the tale of the 47 ronin with a film which can be shown in English if you ask the nice gentleman at the front kiosk. The museum also contains armour worn by some of the ronin, weapons they carried and used, and – best of all – the receipt for Kira’s head.

Indeed. When two of Kira’s friends came to collect his head from the temple for burial, they issued a receipt in exchange, which was signed by those present. Received: one head.

You have to go.

It’s that simple. If you’re at all interested in Japan, if you seek to understand just a fraction of this fascinating culture, if you’re ready to be moved by the reverence the Japanese have for men who gave their lives for honour, you have to go.

Use the Toei Asakusa line to get to Sengakuji Station. Exit the station and cross the road to the temple.